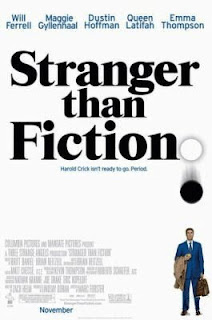 Ok let me preface this with the fact that I have seen this film before but saw it again at a friend's house and let me tell you I can describe it in one word...WOW! This film is absolutely amazing. All of the actors turn in Oscar worthy performances in this movie and a lot of attention was paid to writing an intelligent and engaging storyline. The film follows IRS agent Harold Crick as he goes through his mundane day to day routine until one idle Wednesday while counting brush strokes. He begins to hear the voice of a narrator that is speaking accurately about his thoughts and feelings on everything. Throw in the fact that the narrator drops those little words.."little did he know events had been set in motion starting his imminent death." This sends Harold into a frenzy to figure out what is going on by consulting a professor of literature played by Dustin Hoffman. Through Dr. Hibbert's findings he is forced to track down author Karen Eiffel played BRILLIANTLY by British actress Emma Thompson. Stranger Than Fiction is one of those rare films that gets you emotionally involved with the story and attached to the characters. As well as raising some thought-provoking questions about the narrator of our lives God. Don't miss this wonderful yarn! 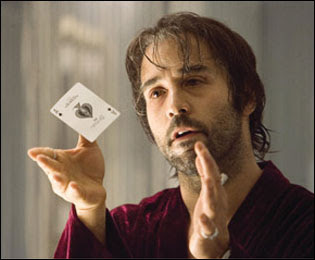 When Vegas magician Buddy "Aces" Israel ends up in hot water with the mob big-wig Primo Sparazza sends 6-hitpeople for his heart. What ensues is an ultraviolent crime-thriller with a very disappointing end. Smokin' Aces starts out like a typical "catch the snitch" hitman flick and then very quickly tries to turn into a human drama where everyone is covered in blood and killing each other. Emotionally the film is all over the place and extremely confusing at times. Every character ends up stabbed, beaten bloody, shot, or otherwise maimed or just plain old dead. The ensemble cast doesn't really work here because they all bring the same thing to the table, lots of moaning in pain from their injuries or just laying there being well...dead. There are 3 elements of this movie that did catch my attention though. First Jeremy Piven was GREAT as Buddy "Aces" Israel he really brought some depth to the role and was one of the only things that kept me watching as the film spiraled into it's bloody finale. Second was Ryan Reynolds actually playing a different character than the lovable dork who can't catch a break from the ladies. He really impressed me as an FBI agent. And finally Matthew Fox in the funniest cameo I have ever seen sporting a mullet and unabomber mustache playing head of casino security, Bill. check out his pic here. So is this Lucky Number Slevin wannabe worth watching? Not on your heart, not even on Buddy Israel's heart come to think of it. If you want an entertaining crime flick that's worth your time intellectually check out Brick or Lucky Number Slevin before this bloodbath that tries to redeem itself with a blatantly obvious twist. 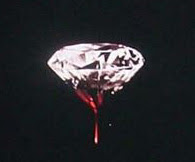 Blood Diamond is director Edward Zwick's film about conflict diamonds being mined in Sierra Leone, Africa during the late 1990's and the heartbreaking atrocities that came out of these "blood diamonds". Blood diamonds are diamonds that have been mined for the purpose of purchasing guns or other weapons with them. They then change hands to the smuggler who then sells them to large jewelry corporations thus making it impossible to trace where they came from. This is one powerful film and I'm really surprised that it didn't get nominated for more Oscars (of course in a perfect world, Children Of Men wouldn't have gotten screwed either). The actors all turned in top notch performances especially Leo DiCaprio sporting a think Zimbabwe accent. The film follows a diamond smuggler (DiCaprio) who ends up chasing after a priceless diamond hidden by a now escaped worker of the R.U.F. (Djimon Hounsou). With the help of a female American journalist (Jennifer Connelly) the 2 set out to rescue his son and recover the stone. The film is hard to watch at points because the camera doesn't cut away from a lot of the onscreen horrors (most of which are committed by children no younger than 12 or 13 years old.) Although the war in Sierra Leone is over blood diamonds are still finding their way into the market and this is a rather eye-opening film that gets you thinking what the wedding ring may be costing others halfway around the world.